Interested in how our services can benefit your organisation?

If you are looking for a dedicated partner that helps developing youth academies and raise standards in talent development, please contact us and discuss possibilities.

How can we help?

I have not come across a club who does not have it; a team selection policy. Amateur clubs scout the best players from a certain age category and subsequently place them in a selection (best) team. For the past six months I have researched this phenomenon. Besides the annual disquiet directly related to the division of players into teams, selection policy turns out to be much more problematic than I had anticipated. The findings of this research project entail the unjustified exclusion of a large group of children from chances for development and that there is great danger in classifying teams as selection or non-selection teams. In this article I will explain why I think a large group of youth players are restricted in the possibility of becoming better players.

By visiting many amateur football clubs and taking a closer look at their policy I have been able to identify two arguments for implementing and maintaining selection policy. First of all, because clubs want to play at the highest possible level with their first team. To realise this, they think they need to develop the most talented players from the youngest age category. Secondly, clubs believe that football players who have the same level of play and ambition have more fun. This article revolves around the first argument and why it is false, or at least more nuanced.

DEVELOPING TALENTS FROM THE YOUNGEST AGE CATEGORY
Clubs divide the scarce resources and facilities that are available to them disproportionally over the selection and non-selection teams. If you are part of a selection team, chances are that your coach is licensed, trains more often and has better facilities available to him. For a variety of reasons, that seems to make sense. The sooner you start developing talented players, the higher chances are that they will develop into quality players that will be valuable for the first team in a later stadium. This is exactly the reason why it has become self-explanatory that we scout players as young as 8 years old and create all the perfect conditions for optimal development.

SCOUTING IS UNRELIABLE
A lot of clubs are preoccupied with both internal and external scouting in order to find the most talented players. The process of selecting and recognising talent is based on two assumptions: that talent develops linear and that future performances can be predicted from a young age. However, research shows that the recognition of potential, especially at a young age, is unreliable and that talent development is capricious. In other words, prediction of those talented players who will actually make it to the top is not accurate (Baker, 2012; Coté & Hancock, 2014). This means the recognition of talent does not go without risk. Potential world-class athletes could be excluded, while at the same time highly anticipated talents could turn out to not have ‘it’ after all.

The so-called relative age effect is another example that shows the complexity of talent identification in sports. The relative age effect entails an overrepresentation of children who were born earlier in the calendar year compared to children who were born later. A possible explanation of this phenomenon could be the fact that players who were born in the first few months are further in their (physical) development, while at the same time they have been able to train more based on the simple fact that they are older. 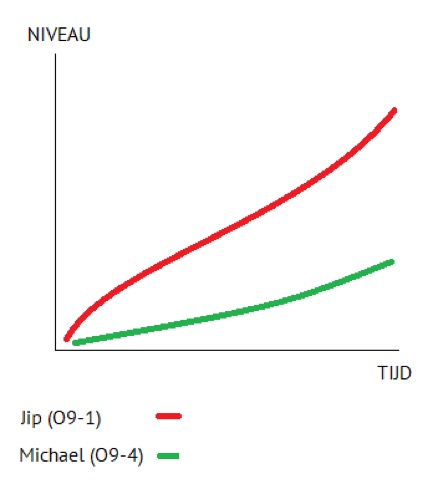 WE ARE LIMITING CHANCES FOR NON-SELECTION PLAYERS
A case: Tim plays in the U9-1 (selection team) and Michael plays in the U9-4 (non-selection team). Tim gets three one-hour training sessions a week under the supervision of a licensed coach. Michael gets a single one-hour training session a week under the supervision of his father, who did not follow a course and does not have any experience. Michael would love to play in a selection team, but at the end of the season the people in charge do not think he is good enough to play in the U10-1. This makes perfect sense, given the fact that over a course of one season he misses about 80 training hours compared to Tim. In addition, it is likely that not just the quantity but also the quality of the training sessions differed significantly. In this case, it is easy to say: “Michael is not good enough, just like we predicted.” It goes without saying that this case is fictive, and the truth is often more nuanced. Nonetheless, to support my point, the difference in the amount of quality training sessions increases annually. Michael’s chances of making it to a selection team gets slimmer from year to year.

In conclusion, there are a number of arguments that show how the early selection of youth players excludes a large group of children from development chances. Clubs basically limit their own success, because they only develop a small number of players. The unreliability and complexity of recognising talent at a young age advocates for developing a large group of players at once.

If you want to know more do not hesitate to get in touch. I would also like to know what your ideas and opinions are about selection policy in amateur football.

Nick Veenbrink works at NMC Bright as a Consultant Sport. He completed his Sports Policy & Sports Management Masters at the Utrecht University and has worked together with a lot of youth academies through the Quality & Performance Program for youth academies in cooperation with the Royal Dutch Football Federation (KNVB)

Update: Sports development on Bonaire in 2022

Getting started as Head of Academy