Interested in how our services can benefit your organisation?

If you are looking for a dedicated partner that helps developing youth academies and raise standards in talent development, please contact us and discuss possibilities.

How can we help?

Feedback is a way of telling people what they need to improve. In the world of sports it is also known as coaching, specifically or explicitly instructing players how to do things better. But recent research shows that feedback is not that good for the learning process of people. In this article we will explain why.

The task of youth coaches is to learn young players new things and improve them by having fun. But the question is: how can we help youth players to improve themselves and learn new things? As said before, feedback is one of the ways to do this. By telling players what to do and how to improve, we are able to make players do things in a different way. Feedback is seen as an important tool to look back at someone’s performance. Most of the time feedback is given from a position of authority. Like a coach tells the layer what he thinks of his/her performance and what he or she can do to improve. But research shows that feedback works counterproductive. There are three main reasons why feedback doesn’t work.

Before you can provide feedback, it’s important to observe as objective as possible. This sounds easy For some people, it is harder than it seems The thing with an observation is that most of the time people judge before the observation is finished. These judgements are based on personal opinions. People have their own opinions about how to achieve certain goals and how to achieve success.

Your observation is based on your own perceptions of the truth. Take, for instance, the picture below. What do you see? 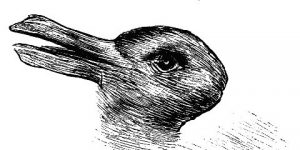 Some people will tell you that they see a duck, but others see a rabbit. Both observations are correct. This is also how it works with feedback. Feedback is given out of a personal observation, perception and value judgement. We observe a performance, but who decides whether something is done right or wrong? In other words, assessment of performance is subjective and so is feedback. This is certainly the case when there is no clear definition of ‘a good performance’. So do you have a clear definition of a good performance? Does this also count for your players? Why is something considered a good or a bad decision?

Besides, we tend to forget the perspective of the receiver. The consequence of this can be that the receiver feels misunderstood and for a receiver it can feel like someone is forcing their opinion on him/her, which can result in a defensive attitude. Instead of being judgmental in your observation, it is better to explain your point of view so the other person is able to understand your point of view. If you do this, it is important to stay humble. Just share what you have observed, explain what it did to you and how you interpreted it. This is a completely different approach in comparison to giving feedback from a position of authority.

Advice: Ask questions and try to understand the perspective of the player (listen, summarize, question). When you reflect on someone, tell them what you observed, this differs from telling your (colored) opinion.

The fundamental idea of feedback is that the process of learning starts by sharing someone’s shortcomings. However, this is not the way our brain works. The parts of our brain that are already well-developed, develop faster than the parts of our brain that are less developed. This means that it takes more time for those less-developed parts of the brain to make connections and reinforce existing connections. A different important aspect is that when people are pointed out on their strengths, they feel appreciated and their confidence will increase. This has a positive effect on the process of learning and makes it easier to take on new challenges.

Beside the positive effect of pointing out someone’s strengths, when you point out someone’s shortcomings, the part of the brain which detects fear and creates the hormone for stress gets activated. This results in a defensive attitude and reduces the ability to learn. It actually pays off to focus on someone’s strengths instead of continuously giving feedback on things someone can improve. Start with turning an 8 into a 9 instead of a 3 into a 4.

Advice: Focus on things which are already going well. It also helps to create exercises in which people are forced to learn new things(challenges). But don’t make these exercises too challenging, players excel when they feel a certain level of success.

Every player is unique and develops in his/her own unique way/ The way players develop depends on various factors, which makes the development process of players complex and unpredictable. This is why there is not one defined way that leads to development. Nevertheless, we are still approaching the process of development as something that is supposed to be linear. We expect players on a certain age to have mastered certain skills.

Getting started as Head of Academy